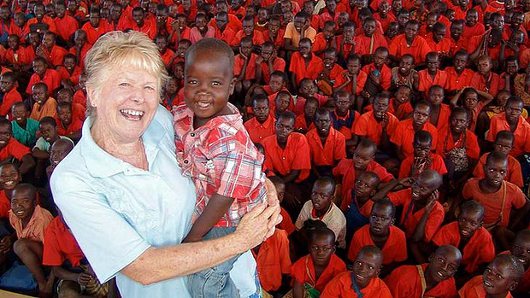 In 1988 a grandmother named Irene Gleeson took a trip to Africa. The desperate need she saw there changed her life. In 1991 she sold her Sydney beachside home, waved a teary goodbye to her family, flew to Uganda, towed a caravan to the northern war zone of Kitgum, gathered 50 war-traumatised children under a mango tree and began to teach and feed them.

Sadly, Irene Gleeson passed away in July 2013 after a year-long battle with cancer. As you’ll hear in this 2006 interview, Irene was expecting to live into her 80s. Things didn’t go to plan. But Irene left behind a remarkable legacy: a charity that cares for 8000 children through five schools, four medical clinics, a 60 bed AIDS hospice and a radio station.

In 2009 Irene was given an Order of Australia (AO) award for her efforts. Nearly 10,000 turned out for her memorial in Kampala. You could say Irene has set a new standard in senior citizenship.

Question: What inspires you most about Irene’s life? Tell me now

‘There was no running water, no electricity, no food; just thousands of destitute children’ Tweet this

‘I never knew why my childhood was so unhappy, but now I can see it gave me the grit and the determination to defend little children‘ Tweet this

‘I sought a father figure through any relationship with any man. When I was 37 years old Jesus took hold of my life again. I asked him to make something out of the mess I’d made of it’ Tweet this

‘All the worries, all the cares—I don’t accept them. Jesus already carried our burdens 2000 years ago, so I don’t have to. If I took them on I would definitely be crushed’ Tweet this

‘I pointed at them and I said, “Don’t touch me. I belong to God. If you touch me God will get you,” and they all backed off’ Tweet this

‘The sun is very harsh on my skin and the diet is not good. I love the sea, but this is a land-locked country. It’s nothing to do with what I would choose, but it works because it’s God’s plan and I was trained for it’ Tweet this

‘Everyone has an amazing, satisfying destiny in God. It’s not glamorous though’ Tweet this