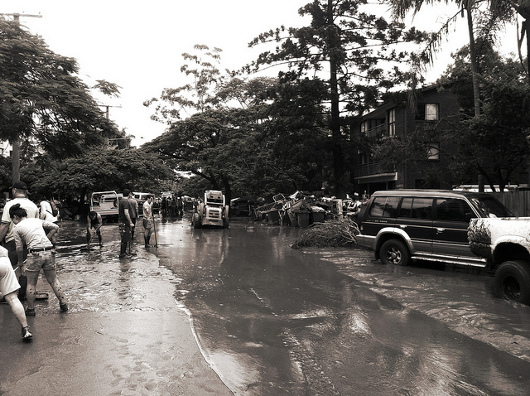 On January 10, 2011, floods ripped through Queensland, Australia, devastating small country towns and big cities alike. But the altruistic acts that emerged during that crisis will never be forgotten. Where does such altruism come from?

‘Look at these people,’ the 84-year-old widow says, a tear in her eye, as 50 strangers set about cleaning her mud-clogged Rosalie home.

‘I just couldn’t let a 90-year-old lady return to her house and have it look like this,’ says the stranger helping another elderly victim. ‘It would break her heart.’

‘Others have lost more than I have,’ says a single mother of newborn twins, who has donated the clothes salvaged from her North Ipswich home to the local refuge centre.

‘Save me brother,’ says a 13-year-old boy to his rescuer, as he clings terrified to a tree during Toowoomba’s tsunami. He is swept away while his 10-year-old sibling is saved.

The catastrophic floods that brought Queensland to its knees in January 2010 were enough to break the hardest heart. Toddlers washed away from exhausted mothers, drivers trapped in sinking cars, businesses gone, homes destroyed, memory-filled lounge rooms reduced to sodden Gyprock and broken glass. As a nation our heads were slumped in our hands. The impact of those floods will last for years, its story told for decades to come, the losses of so many families felt forever.

But amidst the devastation of the nation’s worst flood crisis, one thing helped bring a tear to the eye—a tear born not of grief but of joy:

The selfless acts of a thousand Samaritans.

The stories rolled in day after day. Water-braving individuals who saved lives in Grantham; quick-thinking neighbours who sped children away from Toowoomba; homes in West End opened to strangers seeking refuge; some, like that 13-year-old, paying the ultimate price for their selflessness.

Donations poured in from around the country. Fundraisers were held by car clubs and rock stars. One purpose-made charity aimed to provide 10,000 fridges to flood victims. A toy drive even sprung up for kids who lost all their Christmas presents.

And who will forget the scenes of the post-deluge clean up in those devastated areas? As the flood waters receded waves of volunteers flowed in—hundreds in Toowoomba, 4000 in Ipswich, 12,000 in Brisbane, more than the buses could carry. They came from across Queensland and the country, taking broom, shovel and bucket to the rotten food, broken furniture, mud-stained walls and sewage-reeking homes of victims. They shovelled sludge, scrubbed walls, removed debris and took refreshments door to door.

‘I don’t even know these people,’ that Rosalie widow said, awe-struck.

It all brought a lift to the spirit and a tear to the eye.

A question comes to my mind when I muse over such deeds. Why? Why risk one’s life for a stranger? Why give up time, energy, holidays and business profits to show kindness to another? What motivates such compassion, generosity and gritty, gutsy, sleeves-rolled-up love?

Many have pondered humanity’s altruistic potential. Atheist biologist Richard Dawkins has even sought to account for it. In The God Delusion he says altruism can be explained by one of four reasons, each motivated by our own selfish drive to survive:

And what of doing good to those who aren’t family members, those who can never possibly repay us, and those we’ll never see again to have our social dominance or reputation remembered?

Dawkins offers a solution: doing good to such people is the result of a short-circuit in our genetic wiring. It’s not the way we’re meant to behave. Such deeds are the result of misfirings in our brain—pleasant ‘Darwinian mistakes’, as he calls them.

No doubt, our good deeds in life can be motivated by selfish concerns. We can play games of goodness to improve our reputations, seek indebtedness and display superiority at the office, home or sports field.

But do Dawkins’ four reasons really resonate with the generosity displayed in the Queensland floods, 2009’s Black Saturday fires in Victoria, our response to the Haiti earthquake and the Asian Tsunami, or any number of crises?

In all honesty, to view the sacrifice of that 13-year-old in Toowoomba for his brother as the result of genetic programming strikes me as robbing that child of dignity. And to see those who heroically aided their struggling neighbours as somehow secretly looking for reward is a judgement only the most cynical could make. And to declare compassionate acts to strangers as a defect, rather than the glory, of a human being is to slight the sacredness of humanity and announce the death of love.

Could there be another reason for altruism? A reason that makes sense of the sacrifice, selflessness and goodness that we’ve seen of late?

This is the Christian vision of humanity. ‘So God created man in his own image… male and female he created them,’ Genesis records. Humanity has been designed to a blueprint. We are bearers of the Imago Dei—the image of God. God is the original, we are the portraits, and divine features have been drawn onto every person you see. That image may be scarred through neglect, distorted by greed and smeared by selfishness, but it is still there—in the souls of all races, all colours and all tribes.

And the nature of this image-giver is good. This is a God who is compassionate, gracious and abounding in love; who is a father to the fatherless and a defender of the weak; who gets angry at injustice and who delights in kindness; who provides food for our bodies, puts joy in our hearts, and forever remains faithful to the end.*

And when this God took on the dust of earth and visited our world as a Galilean man, he showed what perfect image-bearing looked like: dropping his plans to help someone in need, weeping with those in their mourning, feeding those who needed food and ultimately giving his life so that others might live. It was said of Jesus that he ‘went around doing good’. He was the goodness of God embodied.†

So when compassionate acts spring forth from the human soul—when strangers mop up widow’s homes and 13-year-olds point rescuers to others—could we not in fact be glimpsing a trace, a hint, a reflection of the One in whose image we are made?

Tracing the stream up the mountain to its origin, could it not be God who is the source of our altruism?

To be sure, humanity is hardly a pure reflector of divinity. While a thousand Samaritans leant flood victims a hand, others were seeking a handful. Some were caught looting, scammers went door to door seeking ‘donations’, text messages promised financial aid in return for bank details, and fake Facebook pages tried diverting financial gifts. Our vision of humanity must broaden here—once divinely designed, we are now clearly fallen.‡

But we judge such acts as evil for a reason: they fail the standard of goodness. Intuitively we know they’re out of step with the way things should be. Perhaps that’s why doing good has its own joy—as we give we are in a small way living in sync with the personality of God.

A God whose love brings a lift to the spirit and a tear to the eye.

This article originally appeared on ABC Religion and Ethics Online